How to Handle a Social Media Crisis

Many companies have been there before. One off-the-cuff tweet ignites a storm of furious reactions and before long they are apologizing and removing said tweet. There are some things you need to know when it comes to handling a social media crisis.

Many larger companies have been there before. One off-the-cuff tweet ignites a storm of furious reactions and before long they are apologizing and removing said tweet. These situations aren’t quite as common for smaller companies, nonprofits, and local businesses, however, that doesn’t mean they do not occur. There are several things you need to know when it comes to handling a social media crisis.

What Constitutes a Social Media Crisis?

A social media crisis is any occurrence in which your social media page is overcome by angry or upset followers. This can result from an off-color tweet, a series of complaints about a service or product, or really any situation in which you feel overwhelmed by negative activity on one or more of your social media platforms. Sometimes these can be prevented by thoroughly reviewing your posts and tactics. However, some crises cannot be prevented and that is what makes them so unpredictable.

How to Prevent a Social Media Crisis
Here are a few tips for preventing a crisis before it happens:

How to Handle a Crisis Once It Occurs
If the unfortunate situation does arise, there are several things you need to keep in mind when handling it:

A Good Example of Handling a Crisis
Handling a social media crisis can be difficult and scary. It is important to remain calm and treat your followers as you would expect to be treated. When Federal Student Aid attempted to engage their target demographic with a little mainstream humor, they overlooked the feelings of their audience. Federal Student Aid released the following tweet: 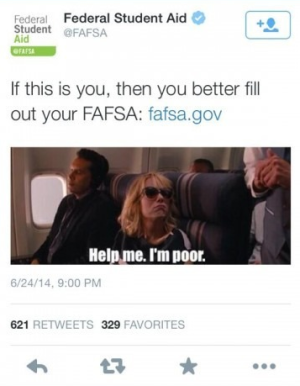 Although they did not think this one through, they handled it well by immediately removing the tweet and issuing a public apology for their insensitivity.

A Bad Example of Handling a Crisis
While the above example shows a company that maturely and professionally handled a social media crisis, this example reveals the opposite. In 2010, an environmental group, Greenpeace, launched a social media attack against Nestle Kit Kat for using unsustainable forest clearing in production of palm oil. This led to a full-on social media frenzy of people posting boycott Kit Kat messages across multiple social media sites.

Unfortunately, Nestle responded by deleting these posts and sarcastically lashing out on those involved. 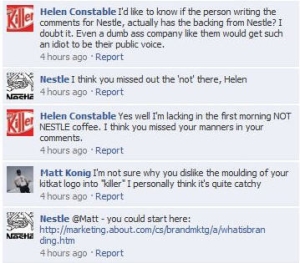 This is a prime example of how you should never respond to fans on Facebook. No matter how they are acting and what they are saying, it is important that you keep things professional. After all, what happens on social media ends up all over the internet for years to come.

If you need help with social media management or developing a plan for handling social media crises, feel free to contact Informatics.

We want to be your partners in success.

One simple conversation can change your business forever.

Please wait while we set things up for you!